Doki Doki Literature Club is a cutesy psychological horror game; and one of the most unique games you might ever play. Let’s look at why you should (and shouldn’t) play it, while analyzing its game design.

Before we dive into the case study itself, I need to give you a few disclaimers. Please, do not take them lightly.

Doki Doki Literature Club is a dark game. It deals with several very intense topics. If you have trouble dealing with that sort of stuff, please don’t play the game and don’t read this article. DDLC touches, among others, upon: depression, anxiety, post traumatic stress disorder, self-harm, suicide, extreme isolation, obsession.

DDLC is a game made by Team Salvato and released in 2017. Back then, it was fairly viral, amassing a cult following. You probably heard it. I think the game itself, its story, its secrets, and hidden puzzles, were examined enough, so I won’t do into detail there. However, I would like to look at DDLC from a game design perspective, as well as analyze a bit the phenomenal writing of the game.

Of course, it goes without saying, this article will spoil the entirety of DDLC. If you haven’t played it, do so, it’s free on Steam or itch.io, and only takes up about 4 hours.

The first half of Doki Doki Literature Club starts pretty normally. You play as the main character, who waits outside his house to walk to high school with his long-time friend Sayori, who overslept. Along the way, you talk about clubs. The school day passes quickly, and Sayori meets up with you to invite you to the club she is in – the literature club.

I personally like the first half of the game, despite the fact that it’s very slow and very different from the rest of the game. It does do a great job of setting up the characters, making you care about them, and giving you the opportunity to get to know them better.

In the literature club, you meet three other girls, Natsuki, Yuri, and of course, Monika. These characters do their best to get you to like them. After the first day, you are presented with a challenge to write your first poem.

This is really the first moment of gameplay we get from DDLC (before it was just clicking with the occasional dialogue option – typical visual novel stuff). In this part of the game, you get to choose words you think will impress the character you like. This does give you the option to pursue the romantic interest you want to, while testing your knowledge of the girls’ personalities. 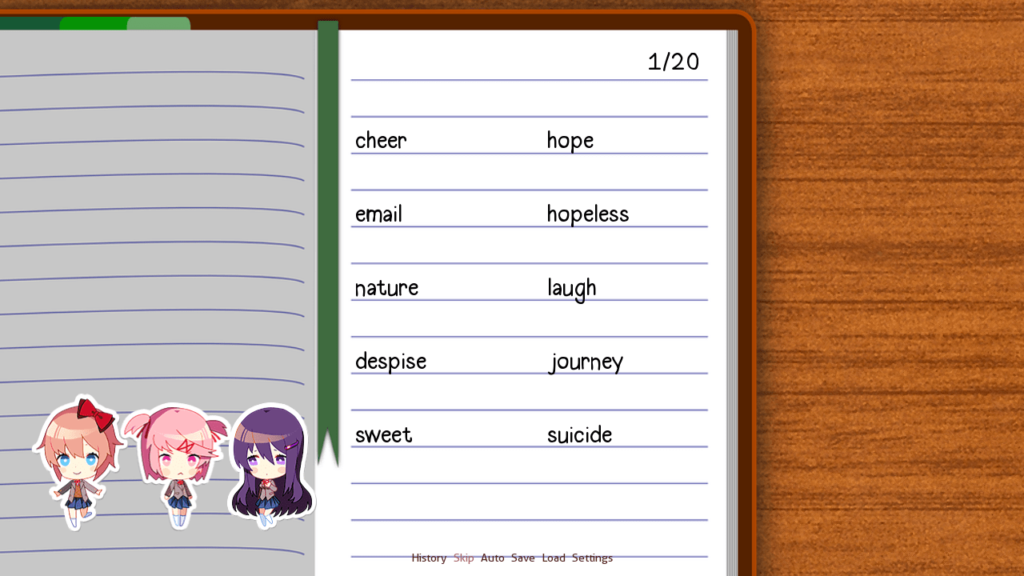 When I played the game for the first time, I was kind of confused by some of the words. Using words like “depression”, which I thought would be Yuri’s cup of tea, impressed Sayori. And there was no way to impress Monika.

However, as you later find out, this is some clever foreshadowing – Sayori is depressed, you just don’t know about it yet, and you can’t pursue Monika, because the game itself is set against her. More on that later, though.

Overall, I like this mechanic. It can get a bit frustrating, especially at the start of the game, when you don’t know the characters as much as you’d like to, but it does put a good sense of interactivity in the otherwise very non-game visual novel.

Poems in the Club

The game continues in a similar fashion. This part of the game stands pretty much only on the story because the gameplay is still only clicking and reading. However, each day of the week, every girl presents you with their poem. This, I believe, is the pinnacle of the game’s already excellent writing.

These poems offer a unique insight into the characters. All four of them have their unique styles of writing, and every poem hints at the darker undertones of the story.

It’s the secret place where I keep all my dreams.

Little balls of sunshine, all rubbing toghether like a bundle of kittens.

I reach inside with my thumb and forefinger and pluck one out.

But there’s no time to waste! I put it in a bottle to keep it safe.

And I put the bottle on the shelf with all of the other bottles.

My collection makes me lots of friends.

Each bottle a starlight to make amends.

Down comes a bottle to save the day.

Deeper and deeper my fingers go.

Like exploring a dark cave, discovering the secrets hiding in the nooks and crannies.

I blow dust off my bottle caps.

My empty shelf could use some more.

My friends look through my locked front door.

Finally, all done. I open up, and in come my friends.

In they come, in such a hurry. Do they want my bottles that much?

I frantically pull them from the shelf, one after the other.

Holding them out to each and every friend.

Each and every bottle.

But every time I let one go, it shatters against the tile between my feet.

They were supposed to be for my friends, my friends who aren’t smiling.

They’re all shouting, pleading. Something.

When the Game Breaks

The game is pretty cool even in its first half, but that is not the reason it became so popular. After the first week in the game story, Sayori commits suicide, and your character is the one to find her body. This is the first of the events that absolutely break the game.

With Sayori dead, the game restarts, but instead of the normal title screen, you see a broken version, one that tried to work without one of its main characters. This iteration loop offers inspiration to people trying to make meta games – the game starts over, something is different, and the game itself recognizes this fact.

You can start the game again, and the beginning looks very much the same. You are waiting outside your house for Sayori, who overslept, but this time, when she is supposed to appear, the game glitches out a bit, tries to put Sayori together using the sprites of the other girls, and then just gives up and moves on. 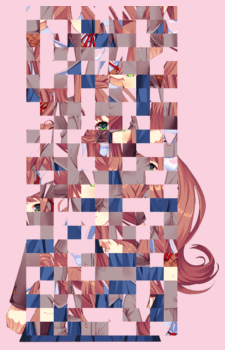 This creates a weird genre of horror. The game glitches out, which is something you can’t really anticipate. The music is also used to great effect to amplify the horror – during the whole game, there are only a few songs that play on loop. Once you get to this part, the music shifts almost unnoticeably, but it does build up the tension. In key moments, the music is omitted entirely, and you are left reading the text in complete silence.

The Game Outside of the Game

Finally, Doki Doki Literature Club possesses one last special game mechanic, and it actually plays out outside the game itself. You can access the game files and find the Characters folder. There lie four files.

Each file representing a character. Throughout the game, you can choose to delete these files, whenever you want. And it has a similar effect as when Sayori dies. The true ending of the game actually has you delete Monika’s file to escape her sentient grasp.

Every one of these files is a puzzle to be solved, but I don’t really want to dive into that here – you can find lots of theories about this online.

To be honest, this game had to take forever to create. The game is made in Ren’Py, a free game engine made specifically to create visual novels. Be sure to check it out (I will do so, too).

This article was something very different from what I do normally, diving more into a case study field. Usually, I write blog posts only about the theory, so studying practical stuff was a challenge for me. Do you like this format? Please, let me know in the comments, so I can continue to improve this blog!